Editor’s note: We will do our best to keep this information updated but, due to its ever-changing nature, check your local legislation for the most accurate information. 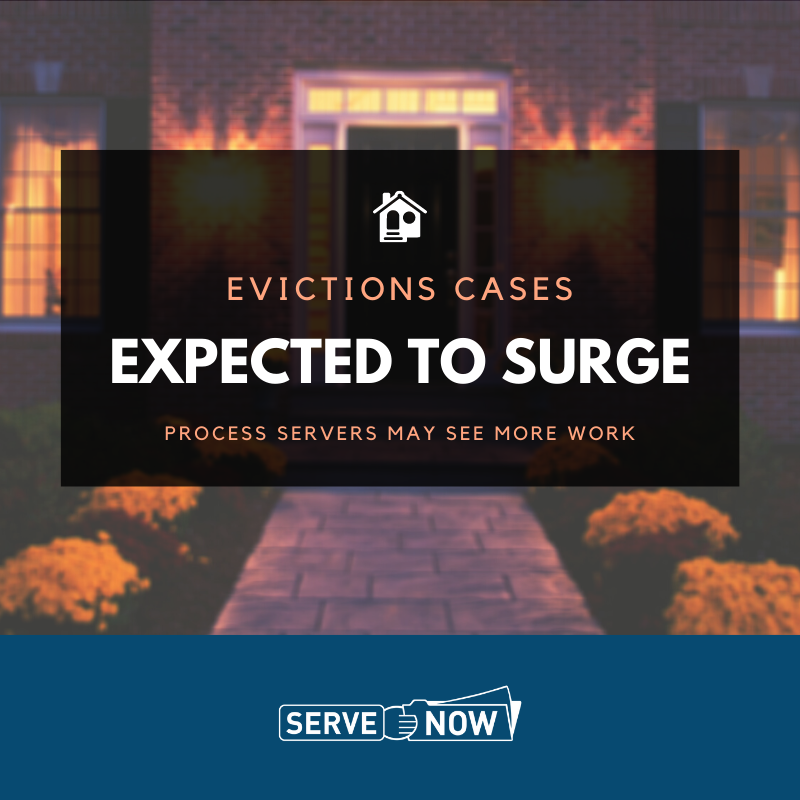 Across the nation, state COVID-19 eviction moratoriums have expired or are nearing expiration, creating an environment ripe for a surge in evictions. Emergency acts put in place at both national and state levels due to COVID-19 prevented landlords from moving forward with evictions as the nation grappled with the unforeseen economic and public health circumstances. The federal eviction moratorium protections put in place expired on July 25, 2020, and although most states also offered similar protections, many opted to let them expire along with the federal measure. In the states where tenant protections have now expired, landlords who had been waiting months to evict past-due tenants are now able to freely begin the eviction process. On August 8, 2020, President Trump issued an executive order regarding evictions, but the order ultimately did not definitively extend the moratorium. The expiring moratorium(s) have the potential to significantly impact the civil process service industry as the backlog of evictions cases makes its way through the courts.

The CARES Act (Coronavirus Aid, Relief and Economic Security Act) included provisions that offered several tenant protections. Those living on properties with federally backed mortgages or that participate in federal assistance programs were shielded from eviction proceedings until July 25, 2020, when the protections expired; however, the CARES Act also required that landlords give a 30-day vacate notice, which delays eviction filings until August 24. Additionally, the Federal Housing and Finance Authority stated that Fannie Mae and Freddie Mac would suspend foreclosures and evictions until August 31.

The federal government is attempting to put together a new stimulus package to quell damage from COVID-19. Some options include provisions for tenants, whereas others do not address evictions at all. Currently, four bills that offer tenant protections are stalled in Congress, with some extending eviction moratoriums. Those bills include the HEROES Act, Emergency Housing Protections and Relief Act of 2020, RELIEF Act (Rent Emergencies Leave Impacts on Evicted Families), Protecting Renters from Evictions and Fees Act of 2020, and the Emergency Housing Voucher Act of 2020. Each of the four stalled bills include generous provisions for tenants, with a moratorium on evictions in some cases for over 12 months.

While the potential for the US Congress to pass either a new bill preventing evictions or a reinstatement of the federal eviction moratorium (among other CARES Act protections and stimulus measures) seemed probable, talks stalled, and no bills were passed. As discussions came to a halt, President Donald Trump mentioned that he may take executive action to reinstate the moratorium. On Saturday, August, 8th, Trump issued an executive order that addressed evictions, stating that “The CARES Act imposed a temporary moratorium on evictions of certain renters subject to certain conditions. That moratorium has now expired, and there is a significant risk that this will set off an abnormally large wave of evictions.” However, the executive order did not officially reinstate a moratorium or impose a new one, instead, ultimately directing other governmental agencies, including The Secretary of the Treasury and the Secretary of Housing and Urban Development, to identify those at risk and provide them with assistance.

Thousands of visitors come to ServeNow each day looking to hire process servers like you. Join our network and start getting more clients today. Learn more

Provided an official federal moratorium is not reinstated or recreated, a surge in evictions may not be seen in all states (at least not yet), as sixteen states opted to enact emergency legislation to extend eviction protections independently of the federal government. At some point, all of the evictions moratoriums will expire, and there will likely be a surge in evictions cases.

Four others offered the most generous provisions, which give tenants over a month before the protections expire, and those states include:

While states are varied in their protections, what complicates matters, especially for process servers, is that evictions protocol is also being determined in some states by county and even by city. Further adding to the complexity is that some are filing lawsuits to combat the anticipated wave of evictions, which offers at the very least, delays in the process, or at best, extensions of tenants’ rights.

The surge in evictions will not happen at the same time because states offer various protections for tenants. Typically, process servers can look to larger states to see what they can expect. However, states with the highest populations in the US aren’t all on the same page when it comes to tenant protections.

In California, state-wide eviction protections expired with the CARES Act evictions protections. Extensions are on a city and county basis, varying wildly depending on location. NOLO provides an excellent breakdown of the current provisions within California. Throughout the state, both tenants and landlords are voicing their opinions. Protestors took to city halls, seeking an extension of the moratorium while demanding rent get “canceled.” Meanwhile, landlords feel stuck according to one report by a local California news station, unable to move forward with evictions processes on tenants who have been unable to pay. Currently, there are no state bills pending that could extend the moratorium; however, federal options to extend tenant protections are not off the table yet.

Florida’s extended tenant protections are set to expire on September 1st, after Florida Governor Ron DeSantis extended protections on July 29, 2020, through Executive Order 20-180. News agencies across the state have reported that the “floodgates will open” at the expiration of the order due to the backlog of cases. For example, the Orlando Sentinel reported that “there are about 1,000 evictions filed every month in Orange County, which could mean there’s a backlog of at least 5,000 cases.” This delays evictions in Florida, though it seems to only prolong a looming crisis. Florida Today noted that the “Florida-wide housing disaster” will merely be delayed by the governor’s recent order.

Illinois’ tenant protections were also extended through August 22 by Governor JB Pritzker through governmental executive order 2020-48. Unless extended, evictions will resume once the state provisions expire.

Similar to Illinois, New York Governor Andrew Cuomo extended tenant protections through an executive order, providing protections through August 20, 2020. When these provisions expire, if no new legislation is enacted, evictions will resume. Currently, it appears that tenants will need to show financial hardship in court to avoid eviction, according to recent news releases.

Texas allowed the evictions protections to cease in July with the federal moratorium’s expiration. However, recently on August 7, Texas Attorney General Ken Paxton ruled that local governments do not have the power to create or extend evictions moratoriums, even though they are granted some emergency powers as a result of the COVID-19 pandemic. This means that throughout the state of Texas, no additional provisions for tenants can be made, which ultimately will result in more evictions being filed.

While those are the states with the largest populations, it may not mean that they have the highest percent of evictions when the moratoriums expire. For example, one news outlet reported that Connecticut may soar to have the highest rate, and others are also reporting dramatic increases. 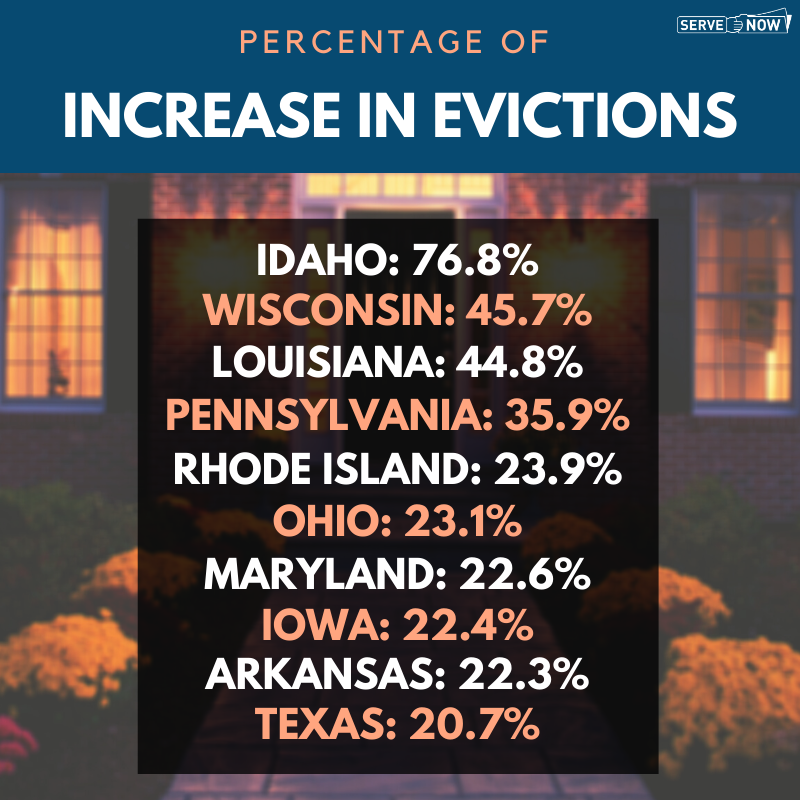 News outlets are reporting that Wisconsin and Idaho are experiencing the largest surge in evictions cases, according to data compiled by LegalShield, a nationwide legal service, which issued a press release to several news outlets. Their report contends, “Comparing first to second quarter, Idaho recorded a 76.8% spike in requests for service around ‘landlord/tenant-eviction’ concerns, the largest increase among any state, while Wisconsin notched a 45.7% increase. Louisiana (44.8%), Pennsylvania (35.9%), Rhode Island (23.9%), Ohio (23.1%), Maryland (22.6%), Iowa (22.4%), Arkansas (22.3%), and Texas (20.7%) rounded out the top 10 states with largest quarter-over-quarter increase.”

The economic impacts of the coronavirus are still unfolding. The Wall Street Journal reported in early August that the federal unemployment rate peaked in April 2020 at 15%; however, that was short-lived as July added 1.8 million jobs and boasted a lower 10.2% unemployment rate, signaling that economic conditions are improving. As individuals lose their source of income, they lose their ability to stay on top of bills, including mortgages and rent. As COVID-19 persisted through the spring and summer months, many individuals who were not able to pay their rent on time or at all for months on end were able to stay in their homes thanks to the aforementioned CARES Act protections. As those have expired, landlords will be able to start eviction processes after months of nonpayment.

The Legal Services Corporation, a non-profit that “promotes equal access to justice and provides grants for high-quality civil legal assistance to low-income Americans,” estimates that it would cost $2.5 billion to prevent a full-blown eviction crisis.

What Does This Mean For Process Servers? 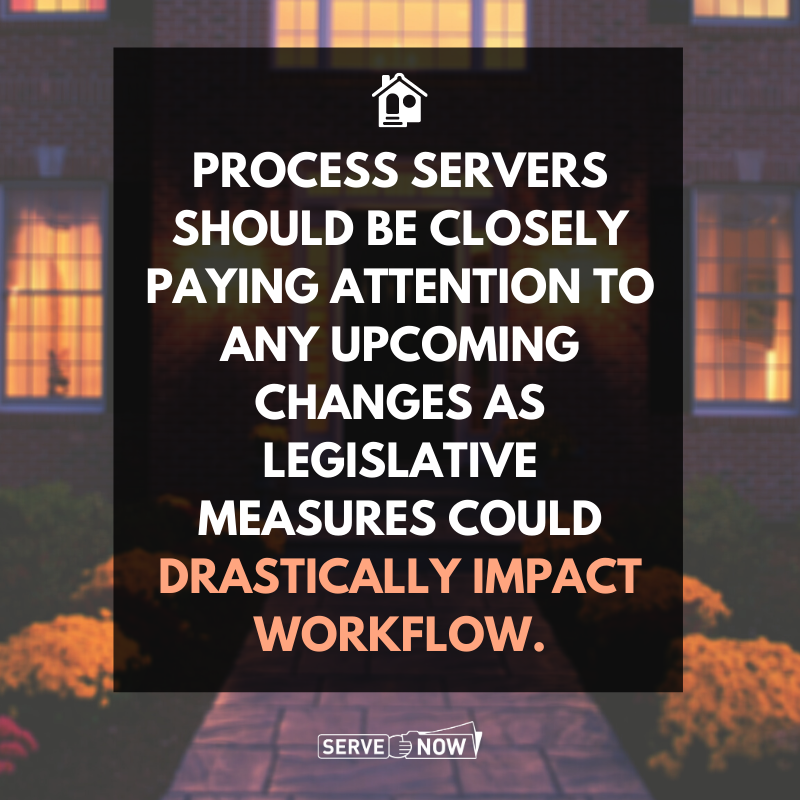 Process servers play a critical role in the evictions proceedings by giving tenants the due process notice that they will need to appear in court. Process servers should be closely paying attention to any upcoming changes as legislative measures could drastically impact workflow. This means paying attention to not only federal legislative matters, but state and local governments as well, as many across the country are legislating their own rules.

While the ultimate impact is yet to be seen, process servers should gear up for a potentially busy season with an impending slew of evictions — at some point in time, the moratoriums will cease, and those behind on their rent will face eviction processes. The true number of evictions to come are still unforeseen due to the complexity of the issue. This was also recently reiterated in a recent New York Times article: “Evictions, meted out by local courts, are difficult to tally nationwide.”

We’ll do our best to keep you informed, so check back for updates.

Do you think there will be an influx of serves when the COVID-19 eviction moratoriums lift? Are you prepared for the increase in jobs? Share your thoughts by joining our groups on LinkedIn and Facebook or contact us.